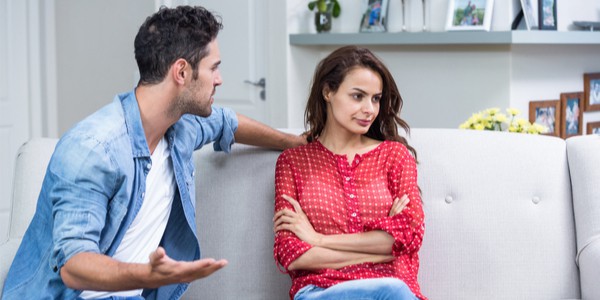 If you have a religious girlfriend who won’t have sex (or is using her religion as an excuse to put up resistance), this article will show you the best way to handle this situation.

But first, let’s take a look at an email from a reader who is going through this exact same problem. My response can be seen below in bold.

Hi Chris, my finacee has become increasingly more religious about not having sex before marriage. We have had an incredible sex life for well over a year but with some guilt on her end. She now wants to abstain from sex until we get married.

I cut her off because this was unacceptable to me. She finally contacted me and said I was mean by not contacting her. I told her that she could have contacted me and never got back with me about her schedule. She blamed it all on me and said she was hurt. I once again apologized. She suggested we meet up to talk.

You are right, of course. She could have contacted you at any time. She was simply testing you, and you passed the test because you didn’t chase her and stayed no contact.

She once again was supposed to get back with me on her availability for this meet up but failed to. I had to initiate contacting her to meet up. We got together and she initiated affection the whole time. We argued about the sex before marriage issue. She said she was very depressed with life and really missed being able to see me. We continued to go in circles by being affectionate with each other yet not bending on the main issue. We are now going on four days with no contact once again. I do not want to initiate contact. I feel she is trying to get me to chase her. Should I dump her? She wants to get married before she has sex again.

In that case, her behavior is cause for concern. Do you really want to marry such a person? Someone who suddenly, out of nowhere, decides to cut off sex for no rational reason, and so close to the wedding?

Do you want to marry someone who can change their mind like this? What happens if you get married to your girlfriend, and she finds another reason to cut off sex, or introduce another problem into the relationship?

You are right to be concerned, her behavior is a red flag. I would also take the position that you are not going to marry such person because you can’t trust what she will do after you are married.

Your religious girlfriend will hold you to something else in the future if you agree to this. She will continue to test you, the sex will become less frequent, and she will use sex as a weapon against you: frequently cutting off sex as a way to punish you or to get what she wants.

You will need to get this issue sorted out before you even think about putting a ring on her finger.

Even if that means walking away from her and being willing to cut her off, you must do this. I would honestly stay no contact with her, and have the mindset that you will leave her if she doesn’t soften and have sex with you (as she did without any problem before).

Also, her increasing––if it’s genuine––interest in religion is cause for concern. One of my friends married a girl who was spiritual and always spoke about religion before he married her, but she wasn’t that serious about it.

It was only after he married her that she decided that she would focus on religion more and ultimately she became a born-again Christian.

You can imagine that they didn’t last long, and he was desperate to get out of the relationship. It’s okay to marry a religious girl if she has always been like that and you share the same common values—if not, be very careful––religion can be a deal breaker.

I would say in this situation, be willing to walk away unless she gives you what you want. It’s easy to do that now before the wedding.

There is a good chance that your religious girlfriend is just testing you. However, if she is not then her behavior is a red flag indeed and must be addressed before you progress the relationship.

Your response to her behavior must be the same regardless of whether it is a test or not. Don’t give in to her demands and don’t contact her until she contacts you. Be willing to walk away unless she gives you what you want.

If you do this, she will most likely comply and demure to give you what you want in order to keep the relationship alive. If she truly loves you, she won’t continue like this for long. You will discover her real motives once you cut her off and walk away.