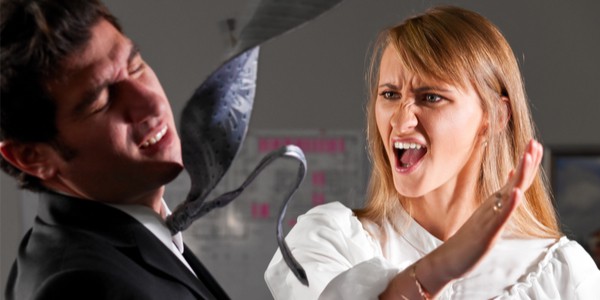 If your girlfriend is acting crazy and bipolar in her behavior, what should you do and how do you fix her behavior before it spirals out of control?

First, let’s take a look at an email from a reader who is going through this exact same problem. My response can be seen below in bold.

Hey Chris, my girlfriend was recently diagnosed with bipolar and has really been starting to act crazy these days.

Yes, this is something to worry about. It’s always scary when we hear that a girl is not quite there and mentally 100% because we may end up on the receiving end of her damaged personality. It’s a classic case of: you pick up a snake and expect it to turn into a kitten, it will never happen and the snake will always bite you. Beware!

I felt she was being kinda obnoxious in public and it turned me off…she even told me a few days before that she wanted to have sex with other guys… don’t u think it’s inappropriate in a relationship? The way she said it made me feel like she was testing me though.

The night before I told her I’d control my anger to work it out and she felt I broke her trust and hurt her… during the drive home she hit me, spat on me, verbally abused me, and started acting crazy. I guess she really is bipolar so I don’t know what to do…

You are angry for good reason. I’ve seen the most mild-mannered men in the world fly into rages because the woman they are with stimulate so much anger in them (by acting in an obnoxious and annoying way, the woman constantly pokes the man and drives him crazy).

Why does a nice, sweet man end up “mysteriously” killing his wife after 20 years of marriage? Because he married a witch and she gave him 20 years of abuse. I think it’s important to be aware of this. Even the most kind, rational people can be pushed to their limits and do things they regret. If you get a chance to walk away, do so before you go crazy along with her.

Honestly, I think this girl is a total liability. She acts crazy, and isn’t going anywhere… She’s also going to get older and more frustrated and angry with time. Where is this going? Is she going to change and improve? I don’t think so. I simply think she is just going to continue to drag you down into her mess. She is going to sap a lot of your energy and take a huge emotional toll on you and weigh you down too.

There’s already some guy trying to go out with her …she says she may need to ask him for rides to work. She hasn’t hung out with him but I feel she’s just saying this to make me jealous…

She is definitely going to use this other guy as a weapon against you to make you feel jealous. That’s just her personality and it’s not going to change anytime soon.

Since I can’t go no contact because we live together how do I behave around her in this situation and what’s the best course of action to take altogether until she leaves? Should I leave for a few days?

This relationship has me questioning my sanity, confused and thinking I got problems from being with her… she is crazy and she is making me crazy too.

Don’t you want to have an easy life, with low stress, and a nurturing, loving, affectionate woman who respects you?

This woman doesn’t tick any boxes. She is just going to continue to create drama and fuck with your head. I understand there is no easy solution because you are attached to her already, however, you do want to start thinking about where this is headed…

It’s impossible to stay no contact when you live together. If you can move out and live with family or friends for a couple of days that might help cool things down.

I get the sense that you can’t trust this girl at all and I think you would be right in this assessment.

If you engage her, then the conflict will only escalate and get worse. You would be pouring fuel onto the fire.

I would recommend disengaging from her when she is acting crazy. Show her that you are not impressed and you don’t give a damn about her obnoxious attitude.

This is the only way she might come to learn that you deserve more respect. Be willing to walk away as well. If you don’t like the way she is behaving, walk away.

Don’t allow her to treat you in a disrespectful way. Some women, however, cannot help themselves. They are unable to control their emotions and they will not only destroy themselves but they will destroy you in the process.

She is the maker of her own misery. On the other hand, some women are rational and clear headed. They think things through, are reasonable, and able to control themselves emotionally.

If your girlfriend is unable to control her emotions, you are going to be in for a rocky road ahead. It’s not going to get any easier, in fact, it’s only going to get worse.

For now, try to distance yourself and walk away at the first sign of disrespect. You must be willing to do this to recalibrate her emotions.

Remember, women respond to how they’re feeling in the moment and the biggest factor in determining her behavior is your behavior/attitude.

It’s only at this point that she is going to respect you and appreciate you. Whether or not she can control her crazy, erratic emotions is another question entirely.