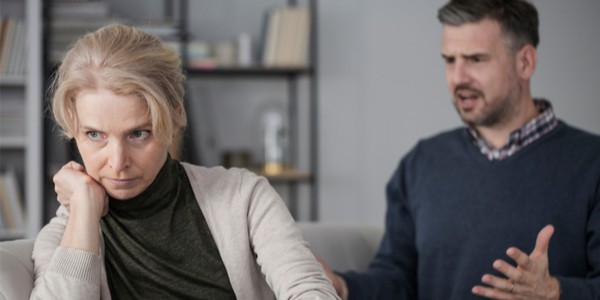 Narcissistic women often use silent treatment as a way to punish a man. This article explains how this happens and what to do in this emotionally abusive situation.

During silent treatment, the woman becomes emotionally withdrawn and refuses to talk to the man.

She doesn’t respond to his phone calls or text message. There is also a disturbing trend among narcissistic women to use the silent treatment as a trap to expose a man’s secrets.

The way this trap works is simple: the woman gives the man the silent treatment for no apparent reason.

In response, the man assumes the worst and begins to make a series of deadly confessions to rectify the situation.

“Why aren’t you talking to me?” The man asks the woman. To which he is met with further silence.

Assuming that the woman has uncovered some terrible piece of information about him, the man begins to reel off a list of sins and crimes he has committed to calm his nerves and help resolve the situation.

Little does the man realize that he has just walked straight into the narcissistic woman’s trap and that she wasn’t even angry with him in the first place, she was testing him in an attempt to uncover his secrets.

If the man thought there were problems before, he is about to find out that the real problems are about to begin in light of his recent confessions.

Peter and Jane had been married for three years and had a one-year-old baby boy.

Their marriage was, on the whole, a happy marriage until one day they had an argument right before going to bed.

Peter came home from work to discover a large scratch on the side of the car.

Jane wanted to get the scratch fixed as soon as possible. Peter didn’t think it was necessary to fix such a small scratch and he couldn’t understand why it was so important to Jane.

The argument soon escalated to the point where Jane refused to sleep with Peter, opting to sleep on the couch instead.

The next day, when Peter came home from work. Jane refused to talk to him, giving him the same silent treatment.

Jane came home late herself, and when she did come home she went straight into another room and didn’t speak to Peter all night.

For the next three days, Jane continued to give Peter the silent treatment and she, in turn, continued to sleep on the couch.

Peter started to get more and more frustrated and angry with Jane. She was so disrespectful and over what? Such a small and pathetic incident.

She always did this. Everything was always about her and what Jane wanted. She exhibited all the signs of a classic narcissist.

Narcissistic partners usually consider themselves superior in the relationship. They think their needs are more important than your needs. They will be insulting, demeaning and disrespectful towards you if they don’t get what they want.

Eventually, Peter relented. He tried to apologize to Jane but she ignored him. She didn’t even say a word.

Peter tried to reason with Jane but she continued to give him the silent treatment. I’m going to make him pay, Jane thought to herself.

Peter, to his credit, even asked Jane to come back to bed, but she had refused to speak to him. She was starting to enjoy making Peter feel uncomfortable.

When asked why Jane had decided to divorce Peter, Jane recalled that they had both stopped speaking to each other.

It wasn’t her fault, she reasoned. He should have made more of an effort.

How To Resolve Silent Treatment

Even if you have done something to upset a woman, silent treatment on the woman’s part is never an effective way to deal with the problem and should never be tolerated.

The best solution to this passive aggressive behavior is to take a logical approach and handle the situation step-by-step.

The following steps outline the best way to deal with silent treatment in relationships:

Mirror the woman’s emotions and allow her a couple of days grace period to allow her emotions to cool off.

In the meantime, make no attempt to apologize for something that you have or haven’t done or attempt to console the woman and force the conversation.

You must back-off and mirror the woman’s silence until she is ready to come back to you.

If you have done something wrong, then this can be discussed in a normal rational way, face-to-face.

If the woman continues to remain silent after an extended period of time, you must remove yourself from the woman’s presence and never come back until the woman learns how to communicate properly with you and express her feelings.

This might sound like a harsh approach to a difficult situation, but anything less than showing the woman that you’re willing to walk away will be misconstrued as weakness on the part of the man for tolerating her emotionally abusive, narcissistic behavior.

The moment a woman realizes that you’re willing to walk away from her is the moment she starts to respect you again and value your presence.

For more information on this subject, please check out my in-depth article: Dealing with Narcissistic Women – The Female Psychopath.