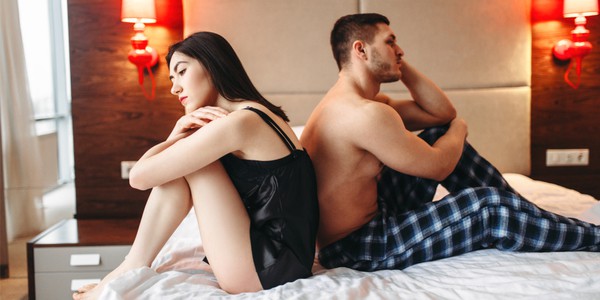 If your live-in girlfriend doesn’t want sex, this article will show you how to rebuild attraction and get her to want you again.

First, let’s take a look at an email from a reader who is going through this exact same problem. My response can be seen below in bold.

Note: all names and personal information have been changed for privacy reason.

Hi Chris,  I have had a 2 year long relationship with a girl who left me in early March of this year. She went to live with another man for 2 months. It was devastating to me, but amazingly enough she came back to me three weeks ago and is now living in my apartment with me again after being away for 2 months.

To be honest, I’m surprised you wanted her back after she left you to go and sleep with another guy. It is a very hurtful situation for you and it’s never a good idea to take such a woman back (from both a practical and emotional point-of-view).

She says that she was not happy with the other guy. When she returned we were both very happy and our first sex was great, but after that it went back to bad sex. We have a strong connection, but she says that she is not sexually attracted to me. It is again devastating to me.

Why did she leave you in the first place? That’s the problem I have with this situation and my biggest concern so far. You got her back because she realized that the other guy wasn’t as good as you, but only because he was making mistakes—not because she was so head over heals in love with you that she couldn’t leave you.

She doesn’t know if she wants to have me as the man of her life, but she realizes that we can’t have a relationship without sex, the problem is that she is just not feeling it for me as she did when we first started.

Yeah, she left you for another guy and the original reason why she left hasn’t gone away. It’s still there, lingering underneath the surface. The moment she comes back to you, those issues are re-activated again and she starts to pull away and lose attraction (just like before).

The problem now is that she doesn’t feel sexually attracted to me.

I’m no novice when it comes to women. I have had dozens of relationships and have been sexual with many women. I know I should have given up on this one long ago, but the problem is that we lived, and live, together and have a strong attachment to each other. Every night we cuddle and kiss, but it never escalates to sex, and when it does she stops it or just lies there to do my thing while she is passionless. It’s horrible. She wants to be sexual, but she can’t bring herself to feeling it for me.

It sounds like you have become too close and comfortable with this girl. You hold each other close, kiss each other and cuddle every night, which is great for building comfort and attachment, but not so great for building sexual tension and desire. It’s often difficult to have both components in place. Attraction and love are too very different beasts that you need to handle differently.

I love this woman and I wonder what I should do. Should I Try to gain her affection back or forget her? If the passion was there again we would both be willing to jump full on to marriage and more, but it’s not. We live together only because we want to, for now. We are both financially independent. Please help.

It sounds to me as though you are attracted to her, but she has lost all attraction for you. So this leads us to that all important question/s: what is attraction and how do we rebuild it when it’s gone?

The first thing to consider, as I mention in my book Atomic Attraction, is that attraction doesn’t grow in warmth and comfort. It grows in uncertainty, challenge, mystery, tension, and unpredictability.

If you spend all your time being nice and sweet and loving to this girl, you will suck all the tension and sexual attraction out of the air. The same goes for spending too much time hugging and touching and kissing. It does bridge the distance between you, but this is the problem, there is no space for attraction to grow.

This leads us on to another important point. You need to have space in the relationship for attraction to grow. If you live with a girl and see her all the time, there is no space. There is no mystery. And she no longer feels excited by your presence.

No Attraction, No Sex

I once had a reader with a similar problem (let’s call him Joe). Joe lived with his girlfriend who was ten years younger than him. His girlfriend no longer wanted to have sex with him and she no longer found him attractive.

Joe was devastated by the loss of attraction and he felt his manhood slipping away from him every time he tried to make love to her. He would try to talk about the problem with his girlfriend to no avail.

Let’s break this down into three parts, if you want to get this girl attracted to you, first you bring space into the relationship.

If you live together that means being less available and being away from home more often. Mix up your routine. Come back later than expected. Spend more time doing things away from home. Focus on yourself, instead of focusing on her.

This way you will get your girlfriend to think about you and miss you more. Then, when she finally does see you again, she will be more inclined to want to have sex with you.

It’s also important that you become a mystery and a challenge to your girlfriend. A woman must feel as though she has to work to win you over if she is going to value you and find you truly attractive.

So how do you become a mystery and a challenge? Part of this comes naturally from bringing more space into the relationship. The other part comes from being less emotionally open and communicative.

I don’t mean this in a negative way. Don’t be passive aggressive here. What I mean by being less emotionally open and communicative is to refrain from talking about your feelings and the relationship.

If you’re always telling your girlfriend how much love her, miss her, care about her, then you’re going to kill all mystery. You have become an open book and she is gong to get bored with you fast.

The moment you do this, you get your girlfriend re-focused back onto you and thinking about you again. This is crucial if you want to rebuild attraction here.

The third part of rebuilding attraction is adding sexual tension back into the relationship. Tension, again comes from space, distance and mystery. She thinks about you, she misses you, she craves your touch and presence again, leading to sexual tension.

The other, important component of tension, revolves around touch. If you touch your girlfriend too much (hugging, holding and general touching), you will kill attraction because you’re not allowing enough space into the relationship.

I’ve seen couples go away on romantic weekends together, only for the woman to refuse to have sex with the man once they get to the bedroom. The reason?

The man spent the entire weekend walking down the beach holding his girlfriend’s hand. He then proceeded to hold her close and hug her as they sipped drinks by a roaring log fire.

When it was time to go to bed, what happened? The women already felt emotionally satisfied and sexually satiated. She didn’t feel a pressing need to draw closer to the man and have sex with him.

If the man had spent the entire weekend holding back, allowing sexual tension to build by withholding his touch, sex would have been a guarantee.

If you implement these strategies and find that they still don’t work, you might need to add some dread game into the mix in a couple of weeks if your girlfriend is still reluctant to have sex with you.