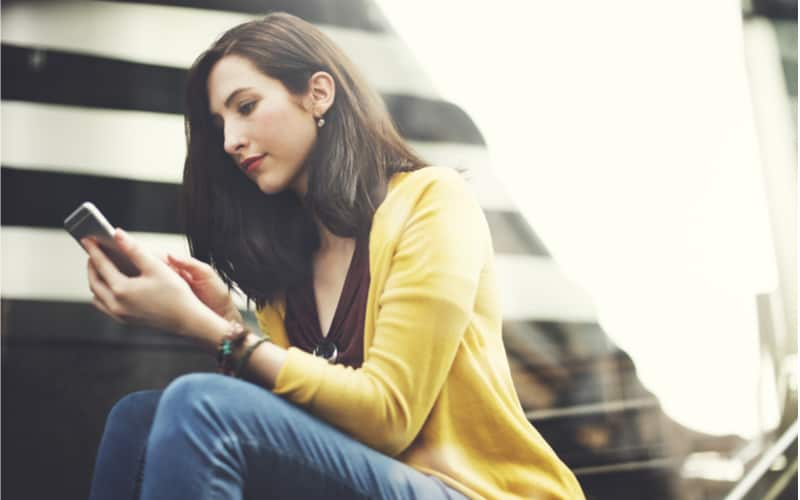 A lot of guys reach out to me because they’re used to dating women who are overly communicative, who moving things along fast, and are very responsive. Then, all of a sudden, they meet a girl who is more distant, less communicative, less responsive and it feels as though things aren’t progressing.

It’s frustrating as hell from the guy’s point of view because it feels as though the woman doesn’t really like him or is playing games (keeping other guys in the background).

The reality is: there are millions of “cool” women like this and they do take a lot longer to warm up than other women. Not every women reacts and behaves the same way.

The key with women in this situation is to follow their actions. Forget about the phone/text. Some women can’t stand talking on the phone and if they don’t have social media or a strong social media presence this is a good indicator of that.

Either way you must focus on her behavior towards you when you see her, and don’t let her communication behavior while she is away from you get under your skin.

I know it’s really hard to stay positive and hopeful when you have so much tension and uncertainty and she is being so cold and distant over text, but it’s key not to let her behavior rattle you.

If you can stay strong and appear unaffected, she will be won over by you and she will start to draw closer to you as more time progresses.

And remember, just because a girl is cold and unresponsive over the phone, it doesn’t mean she doesn’t like you. In my experience, a cold woman is in either one of three states:

This means she doesn’t place much value on communicating over the phone. It has little meaning to her. She prefers to communicate the good old-fashioned way: in person.

The only thing that matters to this type of woman is touch and face-to-face communication. Everything else (like the phone and social media) is superficial.

There are many different ways a woman can test a man. One of the most powerful ways is to feign emotional withdrawal and a sudden lack of interest in the man.

She will then begin to test you even more, becoming increasingly bitchy and disrespectful along the way.

When a woman appears to lose interest or withdraw emotionally, it is crucial that you see her behavior for what it is: a test, and, an opportunity to prove your strength and emotional stability so that she comes back to you even more attracted.

The moment you sense that she has begun to pull away (either by appearing disinterested or refusing to answer your messages or return your phone calls) you should assume that you are being tested and remain in control of yourself and your emotions. You should avoid any display of fear or panic, and you must never act out of neediness or a need for reassurance and comfort.

3) She’s Obsessed With You

Something I never see mentioned anywhere is this little-known but all-too-common situation: a girl is obsessed with you and falling for you hard, so she acts cold and distant. She is aware of her strong feelings for you, so what does she do… she reigns it in and plays cool. She doesn’t want to appear desperate or come on too strong.

If you ask most people why a girl is being cold, distant, unresponsive over the phone, 99% of people will tell you that she has lost interest in you, is going to break up with you, or is seeing someone else behind your back…

Nothing could be further from the truth.

When a woman has a secret obsession and is overwhelmed by the intensity of her feelings for you, she will often play it cool so she doesn’t scare you off. Women don’t want to look desperate and they will often do whatever they can to avoid turning you off. They intuitively know that if they come on too strong, there’s a good chance they will scare you away.

If a girl is hot and heavy and really into you in person, then cold and distant when she is away from you, there’s a good chance she is trying to conceal the intensity of her feelings for you.

Keep in mind, if at any time a woman feels as though you are too relationship focused or she is in the “power” position in the relationship, even if it’s just by a little bit, she won’t be in a rush to see you.

This is going to take all of your self control to overcome this problem. But you need to be willing to go weekends without seeing a girl, you need to be able to distance yourself from her for days and delay your responses to her (just as she does to you).

You need to mirror her emotions and responsiveness. A lot of guys consider this behavior to be fake and manipulative. It is not. You must match her emotional state otherwise you will both be vibrating on different frequencies.

This is important because you need to get your power back and get into the power up position. Second, you need to create a sense of mystery and excitement within her.

If you can do this, she will warm up to you. It takes about 3 months for women to fall in love (if you’re doing everything right). If you’re not doing everything right, it can take a bit longer. But until she has those “lovey dovey” feelings, she won’t be blowing up your phone and being hyper-responsive. And depending on the type of girl she is, sometimes that will never happen.

Some women are just not phone people. As always, you must focus on a woman’s actions as opposed to her words/messages. If she is meeting you, being affectionate to you, kissing you, spending time with you––that’s all you need to know.