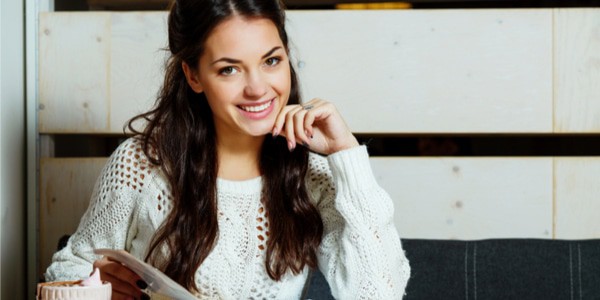 One sign a man must look out for in women, a crucial indicator of interest, is the look she gives him with her eyes. The eyes are the windows to the soul. This article will show you what to do if a woman makes eye contact with you.

When a woman looks at you, even for just a brief second, her look says a thousand words. When a woman makes eye contact with you and gives you a coy smile, she is, without doubt, expressing her interest and openly inviting you to come and talk to her. Any approach you make after a woman has made eye contact with you will not only be welcomed, it will be expected.

A confident man knows how to use his eyes to catch a woman’s attention. When a woman makes eye contact, it’s tempting to look away or be the first to break eye contact. Resist this initial temptation to shift your gaze elsewhere; instead, break the tension and draw her in with a soft smile.

Direct eye contact without a smile is considered a threat and a challenge. On the other hand, direct eye contact accompanied by a smile or slightly raised eyebrows is seen as charming and flirtatious.

Don’t worry about how a woman will respond when you look directly into her eyes and smile. Some women will smile back, letting you know they’re receptive to being approached.

On other occasions, when a woman doesn’t return your smile, don’t allow yourself to become unsettled by her apparent lack of interest. If your smile catches a woman by surprise, she won’t have time to acknowledge you. It’s only in the moment after you smile that she realizes what just happened. And if a woman likes you and is open to talking to you, expect her to look at you again—this time with a smile.

Is Smiling Attractive to Women?

In the study, the male and female participants were asked to rate the attractiveness of each other when they displayed different facial expressions and emotions.

These various facial expressions included happy (smiling), sad, moody, broody, proud, powerful, and confident expressions. What was most interesting about the study was that women rated the men who “smiled” as the least attractive. Men who displayed a “moody” appearance were rated more attractive than men in the “smiling” condition.

Of all the different facial expressions, women rated the “broody” men as the most attractive. There are many reasons to explain these results. First, the man who smiles is more likely to be perceived as weak and open to influence and manipulation.

A woman sees the man’s smile for what it really is: an attempt on the part of the man to win favor by pretending to be nice. Conversely, the man who assumes a “broody” demeanor is more likely to appear masculine and less open to influence and manipulation. 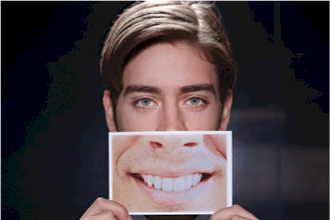 By now you’re probably wondering if it’s ever okay to smile at a woman? And second, if you make eye contact, should you remain cold-faced and broody, or should you break the tension with a smile? The ideal strategy is to maintain a broody expression around women you want to seduce, then, when you make eye contact, you can offer the woman a muted impish smile to signal warmth and approachability.

The impish smile is a slight smile that turns the edge of the mouth upwards then slides away just as easily as it appeared, projecting a look of bemusement as opposed to appearing overly excited by the woman’s presence.

At the same time, the impish smile allows you to maintain an aura of mystery as the woman is left wondering whether or not you actually like her.

Every time you smile at a stranger and use social graces like “please” and “thank you” you’re attempting, either consciously or unconsciously, to ingratiate yourself with that person.

When a man smiles for no reason, women become suspicious. The nice guy thinks that smiling at women will make him look more attractive. In reality, women are turned off by his all too familiar nice guy behavior.

One study conducted by researchers at the University of British Colombia found that men are rated as less attractive when they smile.

Even in online dating studies researchers found that men who posted pictures “not smiling” had more success compared to men who posted pictures of themselves “smiling.” Any time you attempt to ingratiate yourself with a woman by smiling, you inadvertently run the risk of killing attraction. Be aware of this anytime a woman makes eye contact with you.

One hallmark of the alpha male is that his thoughts and actions should be in perfect alignment. An alpha male smiles because he has a reason to smile, not because he feels socially compelled to do so.

An alpha male is attractive because his emotions come from a place of honesty. The nice guy is anything but honest. The nice guy’s actions are designed to please other people and do not reflect his true thoughts or feelings.

Case Study: A Smile Is All It Takes

Mike’s birthday party was in full swing. And Larry had just arrived in time to see Mike blow out the candles on his birthday cake. As Mike was blowing out the candles, Larry noticed a beautiful woman standing in the crowd, singing “Happy Birthday.” An hour went by and Larry still couldn’t take his eyes off the woman. Maybe it was the way her hair flowed down her back or the way her tight, green dress accentuated every curve on her body.

Larry watched as the woman excused herself from a group of people and sauntered over to the poolside bar. This was the perfect opportunity to go and talk to her. Larry finished his beer and strolled over to the bar.

Now would probably be a good time to say something, Larry thought as he ordered a whiskey on the rocks. And just as Larry was about to introduce himself, the woman turned and caught his eye. Larry flashed her a smile. “Hi,” he said. “I’m Larry.”
“Rachel,” the woman replied.
“Are you friends with Mike?”
“Not a close friend, but I know him.”

Larry and Rachel chatted for a couple of minutes before Rachel excused herself.

Rachel couldn’t wait to get back to her friends. She had noticed Larry looking at her out the corner of her eye for the past hour and a half. That wasn’t so bad, she was used to guys checking her out, but something about this guy was “off.”

First, there was the way he carried his drink with his arms folded across his chest. Then when he came over to the bar, she knew he was going to speak to her, but even then he looked nervous as he rubbed his face and scratched the back of his head.

Towards the end of the night, Larry saw a man walk up to Rachel and introduce himself. Rachel flashed the man a big, warm smile and the two of them were soon locked in conversation. Nothing to worry about, Larry thought. It’s only Brad, Mike’s friend from college.

Whenever Larry saw Brad he rarely smiled or looked happy. He even looked bored as he stood there talking to Rachel. That’s nothing to worry about, Larry told himself. There’s no way Rachel could fall for a broody, miserable guy like that.

Meanwhile, on the other side of the pool, Rachel couldn’t take her eyes off Brad. She had noticed him about an hour ago when he first arrived, and something about the way he moved caught her attention. Maybe it was the way he strolled by the pool without a care in the world, his drink held loosely at his side with his jacket slung over his shoulder.

Rachel couldn’t understand what it was about him that she found so attractive. He wasn’t that handsome, at least not in a conventional way, but there was something about him that drew her in.

For one, he oozed confidence. He wasn’t trying to fit in, he was just being himself. He appeared relaxed and mysterious all at the same time.

Rachel felt attracted to Brad the moment she saw him. And when Brad finally introduced himself, Rachel knew she would find it difficult to resist this man. His presence was intoxicating.

The master seducer knows how to use his body to project an aura of strength and confidence at all times. He takes up space and maintains an expression that challenges people to impress him. He rarely if ever smiles, and when he does, it’s a rare and precious gift.

The skilled seducer strolls through the world at his own pace and never hurries or worries about a thing. His movements are akin to those of a cat—loose, relaxed, and languid. The world is there to serve him, not the other way around. It is this projection of attitude that makes the alpha male so irresistible and attractive to women.