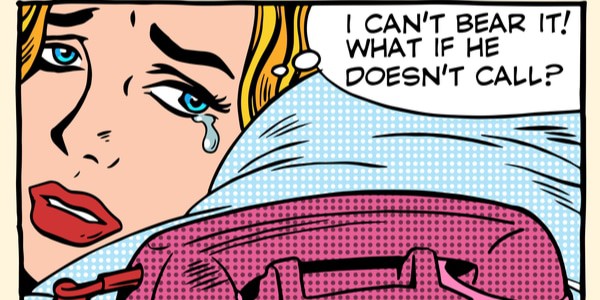 In this article, we look at how giving your girlfriend space (a great psychology hack) is one of the most effective ways to get her back.

A reader recently wrote to me about his girlfriend who had left him. He is now unsure whether or not she should give her space to get her back. You can find my answers below in bold.

(Note: Real names and personal information have been withheld for privacy reasons.)

Background: Me and Jessica met in crossfit and hit it off, she was married to a guy 10 yrs older who she’d been with for 12 years. She hadn’t been happy for a long time and on many occasions tried to leave, but found it easier to stay as they had a child. He has cheated on her, beat her and not a very nice guy. He owned a bar, and she was a young waitress when they got together.

Hi Chris, my girlfriend recently broke up with me. So this is what I need help with.

We are both 36. After talking for a while and arranging a date we went out, had an amazing time, passion was unreal! She then left her husband and moved out to a rented place to be with me. I wasn’t moving in as I hadn’t met her little girl yet.

It sounds as though, up until this point, everything was going great. You were a breath of fresh air to her.

The relationship was passionate and exciting too. You were most likely doing everything right. You were a mystery. A challenge. And you weren’t chasing her, she was chasing you.

In the beginning I found it hard to stay round because of a few reasons, silly ones like having to get up earlier to go to work, leaving my cat on his own.

Might seem like silly excuses, but they’re valid. Your dog needs care and food and you do have to work.

This caused arguments as it would. I started to stay more and things got a bit better. What did happen tho after a month or so of being together, every time we argued she would cut me off, say she was done and block me on everything! I would then panic, pursue her any way I could. I said the first time she pulled away that this behavior really messes with me and please don’t do it as it hurts! It continued and got to a point where nearly every weekend we wouldn’t see each other because of an argument and blocking.

The moment you tell a woman not to do something, what does she do? Women are just like cats.

She knows that you get upset, but she isn’t going to change her behavior just because you get upset. She will keep pulling away, until she no longer has power and control over you.

If you panic and chase her you send a clear signal to your girlfriend: you need her more than she needs you. This leads to the slow death of attraction.

Later I met her daughter and we got along great. Her issue was still that I wasn’t there enough. Which caused arguments still.

It will only cause arguments if you allow yourself to get sucked into the drama. If you engage her in arguments and try to defend yourself with logic and reason, you will never win.

It doesn’t matter if you are the most skilled lawyer in the world. She will still argue with you until you’re blue in the face.

Instead of arguing with her, you must disengage and keep the mood light and relaxed. Don’t feel like you have to apologize because you can’t be there all the time.

Simply tell her you’re busy and you have a lot going on, but explain that you love to see here and appreciate the time you are together.

Now fast forwarding almost 18 months we have been in a back and forth for months, and we’re further apart than ever.

We’ve had some horrible arguments and nasty things where said and at one point she said a few months ago that she loves me but doesn’t see a future with me, which hurt but without being rude, she is a very up and down overthinker and takes cocaine and alcohol on the days she works, has done for 20 years so know this has an effect on her thoughts etc.

Not only will this have a devastating effect on her mind and her body (over the long-run); it will also have a corrosive effect on her thinking. It’s like the old American Indian proverb: if you pick up a snake, don’t be surprised if it bites you.

So now after many break ups and back together and trials etc she is taking time to think.

I’ve given her her space (5 days so far) to think, I did send chocolates with a note saying it’s been a tough few months, I’d like to take us back to a place where we had fun and we’re in love (a spa day we went on last year) so have booked us a day here when and if she is ready. But no pressure and take your time.

She did text saying thank you for the chocolates they were beautiful and that it was a nice message!,

Not sure if this was right?

If you’ve taken the sweet approach before, and I’m sure you have if you keep chasing her and trying to reconcile with her, then you will need to reconsider your actions.

Remember, as Einstein once said: “If you keep on doing the same thing over and over again and expect to get a different result, that’s the definition of insanity.”

If you keep chasing her, buying her gifts, and sending her sweet messages, you are just reinforcing her bad behavior..

I’m now struggling to think of anything else but her and it’s doing my head in. I’ve been reading up on communicating better which I think will help us we are rubbish at that. Things get said or taken wrongly to how they were meant and boom, back to being blocked and ignored.

What’s the best thing I can do? Will she comeback and can we make it work? Will giving her space also work?

If You Chase, She’ll Run

She will come back as long as you don’t try to chase her back. It’s easy to panic in this situation and become desperate. This is dangerous, however, because this is when major mistakes happen. I think you sense it’s wrong to chase her. You’ve probably read some of my articles and seen my videos where I talk about the dangers of trying to chase women.

In the case where your girlfriend has broken up with you and blocked you (a pattern she has repeated before), don’t panic.

You know, based on her past behavior, that she will talk to you, unblock you, and see you again. Past behavior, after all, is the best predictor of future behavior.

With that said, take a deep breath and relax. You WILL see her again and it’s easy to get her back.

The important part of this whole experience is to learn from your mistakes and to not repeat the same mistakes you made in the past. That’s what separates the rank amateur from the professional.

When your girlfriend pulls away from you or breaks up with you, you must mirror her emotions and also pull away in response.

You must never chase her to try and close the distance between you. Instead, do the counter-intuitive thing and allow her to pull away. It doesn’t feel natural to allow this to happen, but it’s important as it builds attraction.

Imagine there’s a piece of string connecting you with your girlfriend. When she pulls away from you the string goes tight. Now, if you chase your girlfriend the string will go slack (causing a loss of sexual tension, which leads to a loss of attraction).

Instead, if you pull away from your girlfriend as she pulls away from you, the string will go tight and you will build sexual tension between the two of you.

This will make your girlfriend more attracted to you. The uncertainty will get her to think about you. And the anxiety “of not knowing” will make her want to close the distance between you.

You don’t need to chase her. You don’t need to be the nice guy here, especially as she is the one who broke up with you. She pulled away from you, she must be the one to come back to you—and she WILL.

Five days is nothing. Women pull away on average for 2-10 days. You need to get comfortable with this timeframe and understand that it’s normal (in the modern world) for women to pull away for this length of time.

If you don’t chase, she will be back.

Now, as far as fixing the communication between the two of you. The best way to approach this is to keep the conversation light and relaxed.

Don’t Talk Yourself Out of Attraction

She will only pull you down if you allow yourself to get drawn into an argument with her. Even if you are the most skilled FBI negotiator in the world, you won’t be able to out negotiate a woman using logic and reason.

Women see the world through the prism of their own emotions. That means that all their decisions and reasoning comes from emotion (which is the opposite of logic and rational thinking).

Even if you win an argument with her, you will only stir up resentment and build bad blood between the two of you. Instead, try to act with indifference to what she says. Use humor to deflect her accusations. And keep the chitchat light and relaxed.

If she’s upset, instead of trying to argue with her, give her a hug or a kiss and tell her she looks sexy when she’s mad. If this doesn’t work, simply tell her that she has nothing to worry about. You love spending time with her and that’s all that matters to you.

If she brings up the fact that you’ve been too busy and don’t have time to see her, you can respond by telling her that you have to work and you see her every chance you get.

If you can implement some of these strategies, you will be in a very strong position to not only get your girlfriend back, but you will be able to keep her around and interested in you as well.