Do girls like facial hair and beards? Or do women prefer men who are clean shaven? This article answers this mystery once and for all–the truth is revealed.

Women are intrigued and captivated by men who sport facial hair and beards. It might sound superficial and ridiculous to imagine that growing facial hair or a beard could make a man look more attractive.

Numerous studies, however, show that facial hair and beards are desirable and sexy.

One such study, published in the Journal of Evolution and Human Behavior found that facial hair has a dramatic and positive effect on a man’s appearance.

Men with heavy stubble or a beard were not only rated more masculine and assertive, they were also rated as healthier and more attractive.

A study comprised of 351 women found that heavy stubble is the most attractive facial hair a man can grow (this is around ten day’s worth of growth).

Researchers at the Evolution & Ecology Research Centre also made a note of the fact that facial hair and beards are not only correlated with maturity and masculinity, they are also correlated with high-levels of dominance and assertiveness.

Case Study: What is it About Facial Hair and Beards? 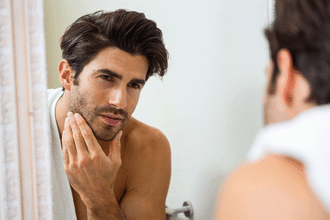 Gary was a regular clean-cut guy. He came from a middle-class, conservative family who espoused the virtues of good grooming and a neat appearance. His clothes were always pressed, his hair was always groomed, and his face was always smooth. Gary didn’t like change, and that was part of the reason why he had kept the same look his entire life. When Gary looked in the mirror, he liked what he saw—a handsome, fresh-faced guy staring back at him. He was traditionally handsome and had a face that was both inoffensive and unthreatening.

Gary felt confident in his appearance, but there was one thing that bothered him. Even though he knew he was good-looking, he didn’t get all that much attention from women.

It was odd, Gary thought. Everything except my love life is awesome. And the few girlfriends I’ve had in the past have all left me feeling uninspired.

Then, just as Gary was lamenting his romantic misfortune, something happened that would change his life forever. Gary contracted pneumonia. The illness put Gary out of action for almost a month. He couldn’t work, he had a constant fever, and except for a week where he stayed in the hospital, Gary spent the rest of his time convalescing at home.

A month later, Gary was starting to feel better. On the weekend before he was due back at work, Gary decided to join some friends for dinner at a restaurant downtown.

When Gary walked into the restaurant, his friends were surprised to see him. He looked different, and although he had lost weight, he also looked more rugged. One of Gary’s friends said he looked “cool with stubble.” Another friend said he looked like a “badass… in a good way.”

These unexpected compliments made Gary stop and think. Nevertheless, it wasn’t until an attractive girl, sitting at a table on the far side of the restaurant, looked right over and flashed him a smile that Gary thought there might be something more to his new “badass” appearance.

It was now only a matter of time before Gary ditched his old, nice guy image in favor of a more edgy, masculine vibe.

If you’re a typical nice guy, your clean-cut image might be working against you. If you want to maximize your potential and become more attractive, never underestimate the power of facial hair and beards when it comes to projecting masculinity.

When you first read this, it’s hard to imagine that growing stubble or a beard could have such a single, dramatic effect on appearance. What is it about facial hair and why is it so attractive to women?

At a basic level, facial hair and beards signal masculinity, strength, and dominance as evidenced by the presence of testosterone.

There is, however, a fear among nice guys that growing facial hair only makes a man look rough and disheveled.

If you’re tempted to think along these lines, keep this in mind—if you want to be perceived as attractive, you must project masculinity and strength at all times.

Facial hair and beards are an easy way to display masculinity and exhibit testosterone in much the same way that a peacock fans out its feathers to attract a mate.

So to answer this question: Yes, women love facial hair and beards!