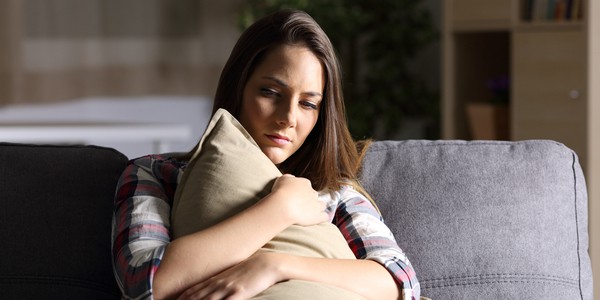 If you’re dating a girl with anxiety or depression, this article will show you the real truth about how to handle this “delicate” situation.

Severe anxiety and depression are both crippling forms of mental illness. Anxiety in it’s worst form can result in panic attacks and servere phobias; depression can result in low mood, dark thoughts and even suicide.

These mental illnesses do exist and the symptoms are severe. If you’re dating a girl with anxiety or depression you will have no doubt that something is very wrong.

On the other hand, women often throw around words like “depression” and “anxiety” to explain away their irrational behavior.

For example, if a woman acts in a rude, cold, or disrespectful way towards a man, she will often attribute her actions to depression and anxiety.

I must have heard men tell me that their girlfriend has depression or anxiety a thousand times. This is something that keeps coming up time and time again.

The moment I hear these words, I always respond the same way:
“All women have depression and anxiety.”

This is partly true as women are more inclined to lean towards anxiety than men.

Is Her Anxiety or Depression Real?

It seems that nowadays most women have some form or anxiety or depression, or do they?

It sounds like a convincing argument on the girl’s part: she has depression/anxiety therefore she is allowed to be miserable, act cold and distant, and get upset with you.

In reality, I am yet to see a case of anxiety or depression that can’t easily be cured by raising a girl’s attraction levels.

Now, that isn’t to say you should be dismissive towards a girl if she keeps on bringing here anxiety/depression issues up with you.

Although you must remember, when a woman talks about her problems and the issues she’s facing, it’s not your job to offer solutions and try to fix her problems.

When a man has a problem and he talks to his friends, the man is looking for a solution. He wants to fix his problem.

A woman, on the other hand, doesn’t want you to fix her problems. She simply wants you to listen and understand what she’s feeling.

Believe it or not, yes, it really is that simple. All you have to do is follow one simple rule: listen, don’t fix.

Do this and you’ll save yourself more trouble than you can even begin to imagine. You must never allow yourself to get sucked into a woman’s problems or try to fix her depression/anxiety.

The moment Veronica sat down to dinner she launched into an angry tirade about how her manager expected her to meet with clients later that week. “I don’t work in sales!” Veronica said, flushed with anger. “No wonder I’m so depressed right now.”

Sean was full of sympathy. He couldn’t bear to see his sweetheart so upset. Fortunately, he knew how to fix her problem.

He told Veronica in no uncertain terms that she needed to have a meeting with her manager or personnel to review her contract and explain that “selling” was not part of her job.

Veronica gave Sean a withering look as though he’d just said the dumbest thing in the world. “You’re not listening to me,” she said.

Sean looked confused. He thought he’d just given her the most sensible and practical way to fix her problem. Sean thought she must have misheard him, so he repeated himself only to have Veronica cut him off mid-sentence.

“Don’t you get it, you never listen to me. I can’t trust you with anything,” she said, leaving the room in disgust.

Sean didn’t know it, but all he had to do was listen, or at least pretend to listen, either way the effect would have been less damaging.

Dating Girls With Anxiety and Depression

It’s natural for a woman to get swept up in her own emotions for no other reason than a female predisposition to become anxious about all matters both serious and trivial.

The same applies to depression. If a man acts in a way that is unattractive, for example, he is needy, highly responsive, weak, or relationship focused, the woman will become “depressed” because she is not happy about the relationship.

Keep in mind, women are relationship focused. If you fail to act in a way that is masculine (focusing your drive and ambition on creating and building things and progressing in the world), a girl will become depressed as you will be seen as a disappointment.

The same applies if you act in a way that is feminine and try to seek commitment and become overly relationship focused.

All the results are the same: the woman will become depressed and anxious because you are not acting in a way she finds attractive anymore.

Understanding how to communicate with a woman is one of the most important parts of the seduction process.

Handle communication the right way and you instantly raise a woman’s attraction for you.

Handle communication the wrong way, however, and the woman will slowly but surely become less and less attracted to you.

If a woman is depressed or anxious around you, and she’s become difficult to deal with, you mustn’t try to fix her problems. Instead, all you have to do is listen.

Behind the scenes, however, you must do some serious soul searching. You must ask yourself some very important questions:

If the answer to any of the above questions is yes, you must start by changing your behavior.

The cure for a girl’s depression and anxiety is not, as so many men think, medication and therapy, but often a change in their own behavior.

Remember, women are emotional creatures that respond to a man’s behavior.

If you act in a light and playful way, a way that is attractive to women, you will be seen as a source of attraction and excitement.

When you date a girl the right way, she will crave your presence and be excited to see you. This in itself is often enough to pull a woman out of her depression and anxiety.

Don’t think you have to sit down with her and be extra nice and supportive just because she said she is struggling with depression/anxiety.

If you’re dating a girl with anxiety or depression, it’s not your job to fix her. It’s your job, as a man, to show her a good time and push for intimacy. The rest will take care of itself.

A Cure For Anxiety and Depression

Now, if the girl your dating genuinely does have severe bouts of crippling depression, the best fix is, again, not medication or therapy. It’s a lifestyle adjustment.

Processed foods, junk food, sugary foods must first be eliminated from her diet. We are what we eat and these foods poison the brain and often result in heightened levels of anxiety and depression.

It goes without saying that smoking, alcohol and drug use fall into the same category. They affect the brain in a severe way. A girl can’t function normally if she’s addicted to any of these substances.

Second, anyone with depression and anxiety must exercise. Exercise is incredibly important. There is no separation between the body and the brain. They are one and the same organism.

Therefore, the brain cannot function properly when the body is idle. Exercise boosts serotonin levels and releases dopamine in the brain. These mood enhancing chemicals are enough to pull most people out of a depressive slump.

I once had a friend who was suicidal for years. He had crippling depression and often wanted to kill himself. In fact, he made several suicide attempts in his early twenties.

What saved him wasn’t years of therapy and medication, it was agreeing to join a friend (an aspiring actor and model) for daily workout sessions in the gym.

Little did my friend realize that this guy was ex military, and his workouts consisted of hitting the gym to engage in brutal two hour training session every day. Bye bye depression.

Of course, you can’t expect a woman to go to the same extremes, but you can encourage her to exercise. Even gentle, consistent exercise would be enough to help her.

I encourage anyone who is dealing with anxiety and depression to start exercising today. The more severe the depression, the more you should workout. It’s a life changer.

If the girl you’re dating has real depression or anxiety, you should encourage her to workout and adopt a more healthy lifestyle.

If she refuses, after much gentle encouragement, I encourage you to walk away. You mustn’t let a woman with depression drag you down with her.

If she won’t help herself and she won’t let you help her, there’s not much else you can do.

On the other hand, if you notice that the girl you’re dating only has depression or anxiety when she’s around you, then it’s most likely an attraction issue that can easily be resolved.