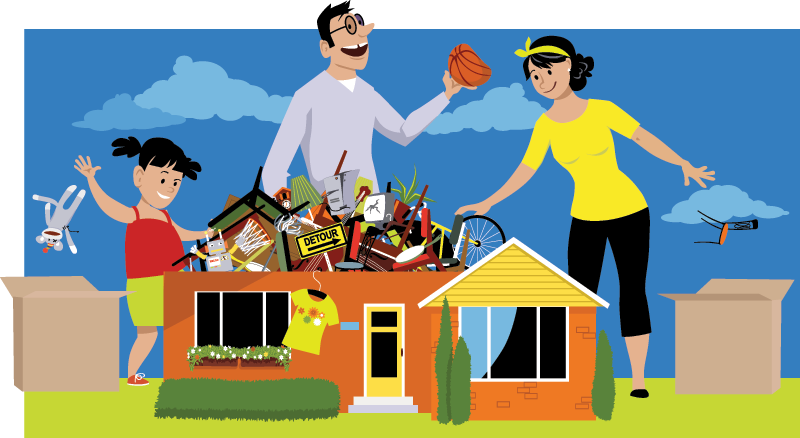 In Buddhism, detachment means recognizing that there is nothing to attach to, for everything is temporary and impermanent. This idea conflicts with Western beliefs that prioritize achievement and wealth above all else. In the West, we believe that every time we get a shiny new possession, like a new phone or luxury car, our lives will improve until we reach a point of ultimate satisfaction. Once you get these possessions, however, it soon becomes clear that any satisfaction is fleeting, and any emotional or spiritual problems that existed before still remain.

Buddhists believe that attachment leads to suffering. Thus, the fewer attachments you have, the less suffering you are likely to experience. Adam’s story illustrates this point. Adam is a restless man in his forties. Hungry for adventure, he’s just made the difficult decision to start a new life in a different city.

The moment Adam starts packing, seeing all his possessions piled up on top of each other, he begins to feel overwhelmed. There’s furniture, cutlery, electronic devices, clothes, shoes, sports equipment, books, magazines, multiple TVs, a sound system, his grandparents’ furniture, paintings, and a spare mattress. The simple thought of moving everything makes Adam feel tired. He can’t imagine fitting all this stuff into his new apartment. Although it would be easier to sell his possessions or give them away, Adam is reluctant to leave anything behind.

After mulling it over for a couple of weeks, Adam decides to put his belongings into storage. That way, I can always come back and pick them up later, he tells himself. The moment Adam leaves his old life behind, however, and moves into his new apartment, he notices that he doesn’t give his old possessions a second thought. He doesn’t miss them, and he doesn’t think about them.

Adam wonders why he made such a big deal about leaving his possessions behind. This is the paradox of desire: wanting is better than having. Adam was reluctant to let go of his grandparents’ furniture and other sentimental items because he thought he would miss them. Instead, Adam discovers that his grandparents’ memory is with him wherever he goes. His memories are, in fact, a part of him and not tied to his possessions.