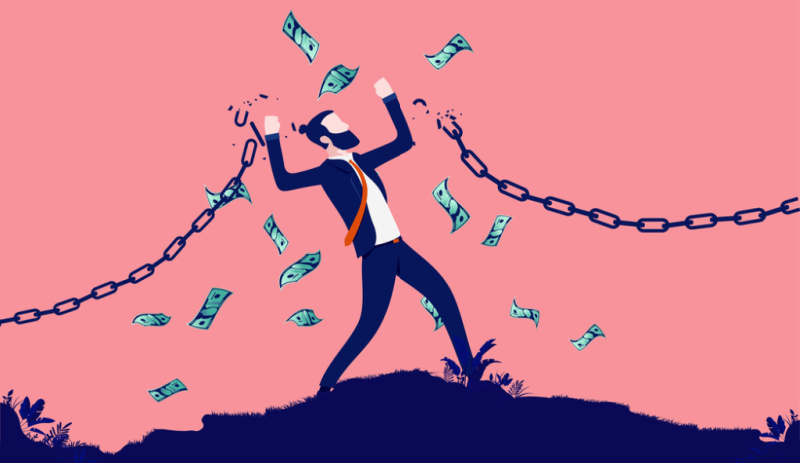 With the arrival of the Industrial Revolution, technology pulled millions of people from their farms to work in factories and sweatshops around the world. This work was often back-breaking, and employers paid workers next to nothing for their labor. This technological shift gave birth to an industrial phenomenon known as the “wage slave”—a term that describes workers who are paid just enough money by their employers for basic survival.

Over time, the industrial economy continued to grow, becoming more efficient and profit-focused. In response, employees were forced to work longer hours for less pay in difficult and often life-threatening conditions.

Fortunately, times have changed, and working conditions have improved. But wage slavery still exists. Today, millions of people find themselves trapped in an endless cycle of work-eat, work-buy, work-sleep.

The modern wage slave receives just enough money to survive and to make sure they come back to work the next day. Most workers don’t earn enough money to leave their jobs without facing severe economic hardship. No safety net or support system allows them to break free and become self-sufficient. These are the true wage slaves of the world.

The employer/wage slave dynamic is so prevalent that most people have experienced wage slavery in one form or another. If you feel trapped in a job you dislike, if you can’t afford to leave, or if you’re constantly worried about being fired, you’re a wage slave. It is not just poor and unskilled workers who find themselves in this situation. Wealthy, educated people can just as easily find themselves trapped in the same frustrating cycle.

While the poor, unskilled worker remains trapped in a cycle of poverty, the wealthy, educated worker is trapped in a cycle of debt and desire. The more possessions they covet, the more money they need, and the more they have to work. Their mounting bills keep them stuck on the nine-to-five treadmill. One of the key problems with modern work is that so much of it is debilitating.

While the industrial economy has helped pull billions of people out of poverty, it has enslaved just as many. We are wage slaves, but it’s hard to notice when working nine to five is considered normal.

Despite its prevalence, our bodies and minds cannot adapt to the nine-to-five routine. Consider that humans have evolved over millions of years to be one with nature and the environment. We now have more food than ever before, yet we’re more starved of nutrients than at any other time in human history. We have never been so safe and comfortable, yet our bodies have never been so unhealthy.

The simple act of sitting down for hours on end has caused millions of people to suffer back pain, inflammation, and obesity. Does this sound like liberation? This state of being has become so common, however, that we no longer question its abnormality. Our bodies are weaker and more disease-prone than ever before. And our mental health and well-being is affected too: depression, loneliness, and anxiety are rife in the modern world.

At no other time in history have humans been so isolated, troubled, and overworked as they are today. This has brought us to the point where many people’s lives are no better than a hamster spinning a wheel inside a cage, working paycheck to paycheck just to buy more possessions. This doesn’t mean that work is pointless. Work is one of the most important aspects of life, and good work provides great meaning and value. Nevertheless, there is a difference between meaningful work and work that provides no value.

The worker who spends their days flattering their superiors to make them feel important; the worker who manipulates systems for their own gain; the pen pushers and box tickers who pretend to be busy but do nothing but waste their time and the time of others; and managers who create work for work’s sake; all these people bring mass inefficiency into the workplace and prevent us from creating real meaning and value in the world.

If we’re not careful, low-value work can enslave us in a cocoon of false comfort as it steals our most valuable resource―time. Time for family, time for friends, time for health, and time for adventure. Time is always more precious than money.

Some people claim that money is the root of all evil, but money is simply a medium of exchange. We need money to buy food and put a roof over our heads. Money is not evil, but it does have the potential to corrupt and enslave. Just as buying possessions can enslave us, institutions and people who lend us money enslave us by expecting something in return. These expectations might include loyalty, a favor, or interest payments on a loan.

If you chase money to buy things you don’t need under the illusion that more possessions will improve your life, you expose yourself to the dark side of money and become trapped. This trap arrives in the form of debt, a house you can’t afford, furniture you can’t sell, or a loan that you struggle to repay.

Dopamine, a feel-good chemical in the brain that regulates pleasure and motivation, plays a vital role here. With each new purchase, dopamine gives us a brief boost of exhilaration before tapering off, leaving us with a desperate urge to go out and buy something else. This doesn’t mean that possessions and money are bad and do irreparable harm; we do, however, need to be careful not to become slaves to our possessions. Ultimately, it’s how we think about money that matters.

Why is money so desirable? Beyond its fundamental purpose to buy goods and services, money can buy us the one thing we all crave―freedom. Freedom to live where we want, do what we want, and control our own time. Yet, despite these significant benefits, most of us don’t use money to set ourselves free. Instead, we become a slave to money, trapped in a never-ending cycle of work, debt, and despair.