A lot of you guys have probably already heard about Nero-Linguistic Programming (NLP) before.

NLP can be used to steer an ex girlfriend in the direction you want them to go—then it is up to them whether or not they are willing to go down the path you have lead them.

NLP is pretty well-known in the pick-up community for trying to mind-control women into bed. This, of course, doesn’t work and you can’t control a person into doing things they don’t want to do.

The Effectiveness Of NLP

Invented in the 1970s, NLP is used in many different areas of life. It’s been used as an effective sales technique, to overcome bad habits and phobias, to let go of bad memories and relationships, and as a way to build confidence and communicate effectively with people.

Now, there is without doubt a dark side to NLP (like manipulating people into doing things they don’t want to do), but it’s important to remember that there are no shady techniques, just shady people.

With that said, NLP can be very effective to make an ex girlfriend, or any woman for that matter, consider going out with you. Is it bad to give her that option and get her thinking about you? I don’t think so.

How To Use NLP

There are lots of different ways to use NLP. Some techniques are very fast and some techniques take longer to implement, and, quite frankly, aren’t worth the mental effort for the results you get back.

There is, however, one NLP technique that I would like to tell you about that can be very effective at getting your ex girlfriend back. This technique is called “eliciting.”

Eliciting is a very fast and easy to implement NLP technique. And because getting your ex back is a time sensitive issue, you can start using elicitation right away.

So how do you use eliciting to win her back?

When most guys are going through a break-up they will be in a depressed state of mind.

They’ll often be communicating with their ex girlfriend in a negative and accusatory way.

These guys generally exhibit the following negative emotions: anger, sadness, hostility, jealousy, rage, confusion, neediness. These same guys will often be depressed and use guilt as well as pleading, desperate behavior to try to get their ex girlfriend back. This never works.

So the first thing you have to do before you start eliciting is to wipe out all trace of negativity from your interactions with your ex girlfriend.

Elicit Her Into A Positive State Of Mind

In order to start using elicitation as an NLP technique to win her back, you need to get your ex girlfriend thinking positive emotions and associations about you.

After a woman has broken up with a man, she’ll have a lot of negative associations about her ex boyfriend floating around inside her head. These negative emotions are what’s stopping her from getting back together with you. 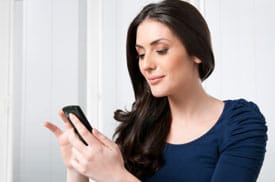 If your ex girlfriend tries to steer the conversation back towards something negative and damaging that you’ve done, deflect this with humor.

Your ex will be impressed that you’ve managed to change so much and stay positive, this alone will get her thinking about you. Furthermore, she’ll start to think about all the good times you had together.

Another useful way to elicit positive emotions is to send her photographs or quotes that were both meaningful and positive in your relationship. When you do this, however, it’s important to make sure that she felt positive about these events too.

By immediately replacing negative thoughts and words with positive words and associations, you’ll be able to get your girlfriend thinking about all the good times you had together and she’ll eventually start to wonder why she broke up with you in the first place.