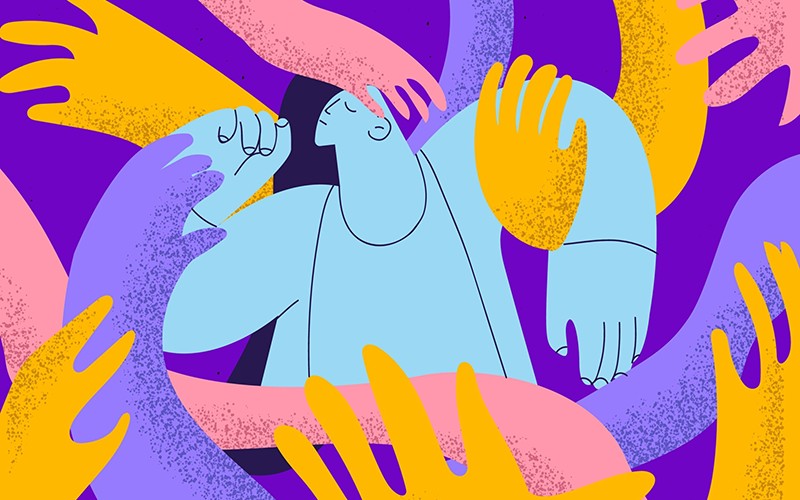 The people-pleaser, the nice guy, the goody two-shoes, the defeatist, and the prude are all examples of psychological slaves. Consider the child who’s raised to put the needs of other people first. They are taught to give their toys to other children, share their ice cream when another child doesn’t have any, and never speak their mind in case they upset other people.

Over time, the child constructs the belief that their needs aren’t important. This is self-imposed slavery at its worst. No longer free and expressive, the child learns to put other people’s needs first. The child grows into an adult and feels more and more undervalued and underappreciated, which gives rise to powerful emotions like anger, fear, sadness, despair, and depression.

When you put other people’s needs ahead of your own, you become a slave to those people. You might think this is a noble sacrifice, a worthy tradeoff, but there’s nothing noble about psychological slavery.

The psychological slave seeks validation above all else, for without validation and acceptance, they feel worthless. Thus begins an endless cycle of validation and approval seeking, which can never be satisfied. And much to the slave’s frustration, the harder they try to win people over, the more they trap themselves and diminish their value.

Some of the most stressed-out people in the world are people-pleasers and nice guys. Even though this form of stress is self-inflicted, nice guys and people-pleasers continue to put other people’s needs first to the detriment of their own well-being.

Human nature is such that the more you try to please people and get them to like you, the more they resent you and lose respect for you. Similarly, when you allow emotions like greed, fear, anger, and jealousy to control you, you set yourself on the path to self-destruction, for these emotions have the power to make slaves out of all of us.

For example, if you compare yourself to other people, you’ll likely end up feeling less fortunate than everyone else. Why does the family next door have a nicer car? Why do they have a bigger house? Why do they make more money? And why does everyone else have a better life?

When you spend all your time looking up, you forget to look down and see all those who are less fortunate. You remain a slave to greed and envy as you measure your self-worth by how much you have in comparison to other people.

Many people find themselves caught in the grip of psychological slavery. Often, this enslavement is a product of a dysfunctional belief. There are times, however, when our psychological enslavement comes from interacting with other people. We become a target of the modern-day slave master.

Three hundred years ago, slave masters captured large groups of people and forced them to work as slaves, but the modern slave master works in much more subtle and sinister ways.

Modern slave masters are the bullies, liars, abusers, manipulators, narcissists, and psychopaths of the world. These people want nothing more than to control, dominate, manipulate, and abuse everyone around them.

You might wonder why someone would want to enslave another person? Indeed, taking away another person’s freedom puts the very nature of freedom in jeopardy. As Abraham Lincoln once said: “Those who deny freedom to others deserve it not for themselves.” But does a narcissist or manipulator care about such things? The answer is no.

Slavery is a repulsive concept to someone who values human life. But we must remember that narcissists, manipulators, and psychopaths thrive on power and control. These toxic individuals come from all walks of life. You will encounter them everywhere.

The sweet old grandma whose greatest joy is manipulating family members, the angelic boy whose biggest thrill is abusing his playmates, and the friendly work colleague who conceals their desire for power behind a caring facade. These are just a few examples of toxic individuals you might encounter in everyday life.

If you’re unfortunate enough to come across one of these individuals, you must keep your guard up because they want nothing more than to enslave other people. In essence, your happiness is their misery, and your despair is their joy. Any happiness or success you experience brings out the worst in these people. And any power they can take from you only serves to inflate their ego and sense of control.

Little does the toxic individual realize that in their insatiable desire to enslave others, they inadvertently enslave themselves. In the same way that a person who lies to others lies to themselves, a person who abuses others also abuses themselves. This might sound like a contradiction: how can you abuse yourself when you abuse other people?

All this leads to long-term damage, stripping away the ability to love and trust other people. Instead of living a life of joy and abundance, the slave master and the slave are bound together by fear, destined to live a life of perpetual slavery.

It’s safe to say that fear has enslaved more people than any man or prison ever could. Fear is so prevalent and pervasive it’s like a virus that infects the mind. In this respect, fear is the killer of dreams and destroyer of hope. For example, if you’re too scared to quit your job and pursue your passion, it’s not your job that’s holding you back; it’s fear of change.

One interesting aspect of fear, however, is that it exists solely within the confines of the mind. Suppose you feel scared to leave the house because of all the negative headlines in the newspapers about crime and disaster. Once you give in to your fear and refuse to leave the house, you psychologically enslave yourself. You become a victim of fear.

Newspapers, social media, and constant background chatter place a tremendous psychological toll on the mind. You must be vigilant to protect yourself from dangerous mental clutter. Otherwise, you risk becoming overwhelmed by constant noise and fearmongering.

Fear is like the boogeyman hiding in the closet. It’s terrifying because you can’t see it, but you convince yourself that it’s there. Once you summon the courage to open the closet, fear evaporates and disappears. Fear lives and dies in the mind. You feel scared and believe your fears to be real when fear is nothing but an illusion created by the mind.

Suppose you analyze all the areas of your life where you feel frustrated. What stops you from improving your life? After some reflection, you might notice that the only thing holding you back is fear. It might be fear of failure, fear of change, fear of stress, fear of financial ruin, or fear of the unknown. Once you pinpoint and highlight the major problem areas in your life, you can start to overcome your fear one small step at a time.

People often wonder why they allow themselves to live in fear. They wonder why they allow fear to hold them hostage and prevent them from living the life of their dreams. This thought becomes all the more frustrating when you realize just how long fear has held you in its grip. While fear can prevent people from taking action, your belief system has the power to enslave you or set you free.

Most of our problems are rooted in childhood. If one girl calls another girl“ fat” in the school playground, the insult is still fresh in the girl’s mind twenty years later. Even when the girl grows up to be anorexic and skinny, she still can’t erase the words “you’re fat” from her memory.

An insult thrown in childhood has fueled a poisonous belief that infects every moment of the woman’s life. Every time she looks in the mirror, she tells herself, “I’m fat and ugly,” when nothing could be further from the truth. The girl’s truth and the truth of the world are vastly different, and her damaging self-talk continues to destroy her confidence with each year that passes.

Another example is the young boy whose teacher tells him he must have a learning difficulty after he fails a science test. The following year, the boy still can’t shake the belief that there’s something wrong with him. He has accepted what his teacher said was true and no longer believes that he can learn anything. He might as well give up.

Because of this damaging belief, the boy fails school, then bounces around from one minimum wage job to another, all the while telling himself, I’m stupid, I’m an idiot, I’m dumb. The young man grows up with the crippling childhood belief that he can’t learn anything and there’s something wrong with him. Thanks to one misguided message from a careless teacher, the young man is psychologically enslaved. His health and future well-being now hang in the balance.