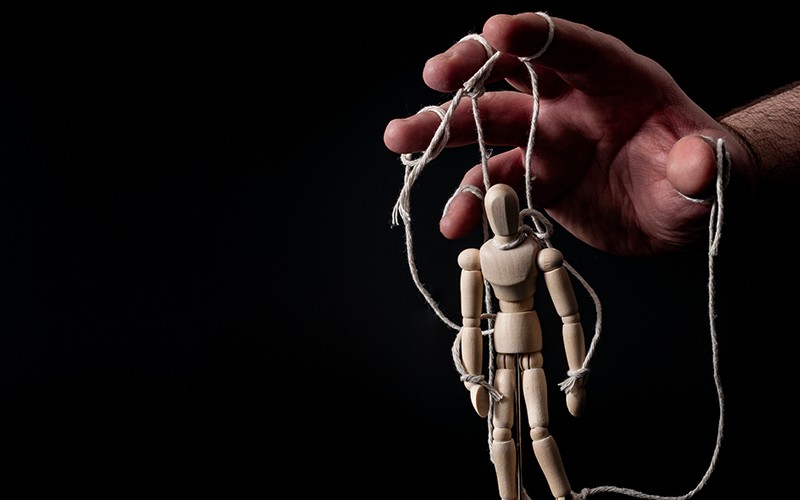 Picture the following scene: A man is driving in heavy traffic when another car cuts in front of him. Enraged, the man blasts his horn and screams profanities. He can’t believe it. How could someone do that? Furious, he beeps the horn again, this time a long, drawn-out blast.

The man feels a momentary sense of relief before his anger comes rushing back. I’m stuck in traffic for over an hour, and this guy has the nerve to cut me off? Goddamnit! People have no respect. Nobody respects me, not my wife, not my kids, not my boss, not even this guy.

At that moment, the traffic starts to move. The man hits the accelerator and pulls out beside the white sedan that cut him off. He glares at the driver, a slick-looking businessman talking on the phone. The driver in the white sedan looks over and gives him the finger.

The man explodes. That’s it! Not only does this guy cut me off, he gives me the finger? Who the hell does he think I am, some sucker who’ll just take it? Well, not anymore! In a fit of rage, the man yanks the steering wheel to one side, slamming his car into the white sedan.

An hour later, the man is sitting in hospital. What was I thinking? I sent that guy to emergency with serious injuries. I’m sitting in hospital, my car’s a write-off, and I can’t afford to buy a new one, let alone fix this guy’s car. Will I lose my license? Probably. Will I go to jail? There’s a good chance.

The man puts his head in his hands and sighs. How could I be so stupid? If only I could turn back time. Why was I so angry? What’s wrong with me? I should’ve just let it go. While this man is undoubtedly guilty of road rage, he’s also a victim. He’s a victim of his own emotions. Any time you lose control and do something you regret, you become a slave to your emotions.

Suppose someone disrespects you or goes out of their way to insult you. In that case, your thoughts will naturally lead to feelings of anger and resentment. In psychology, this is called amygdala hijacking, where the emotional part of the brain overrides the rational part. If someone is physically or verbally abusive, there’s a good chance their amygdala has been hijacked.

Take Alice and Richard, a couple struggling to stay together after being in a relationship for the past two years. Alice and Richard love each other and enjoy each other’s company. There’s only one problem: Alice doesn’t trust Richard. She hasn’t caught Richard doing anything wrong―yet.

He hasn’t lied to her, cheated on her, or been abusive towards her. But something in Alice’s mind tells her not to trust Richard. She thinks he must be hiding something. She’s trusted men before, and they’ve all let her down. Why would Richard be any different? And with that, Alice’s thoughts spiral out of control, making her feel more and more insecure. Is he cheating on me? Did he lie to me? How can I trust him?

In this profoundly emotional state, it’s only a matter of time before Alice destroys the relationship. Even though Richard has done nothing wrong, he’s judged guilty by a jury of toxic emotions.

Alice has allowed her emotions to distort her perception of reality, inadvertently putting a death sentence on their relationship. This highlights one undeniable fact: If we don’t control our emotions, our emotions will control us. This is not to say that emotions are useless or unimportant.

Emotions are a vital part of who we are and how we experience life. While emotions can make life sweeter, they can also cause havoc and destruction. We see evidence of this when our emotions put us in self-sabotaging situations. While it’s true that our emotions can guide us in a positive direction, they can also derail us. So how can you prevent this from happening?

The best way to deal with unruly emotions is to get ahead of them before they bring chaos into your life. Thought creates emotion. Any time you notice negative emotions stir within you, stop and ask yourself if these emotions are valid?

Just because you feel an emotion doesn’t mean it is there to help you, as emotions often put short-term ego gratification ahead of everything else. While our emotions often work to serve our ego, they frequently do so at the expense of our safety and well-being.

This results in emotional slavery, which stops us from progressing and traps us in a life of discomfort and self-sabotaging behavior. It’s for this reason that you must make a conscious effort to control your emotions before they overwhelm you and disrupt your life.