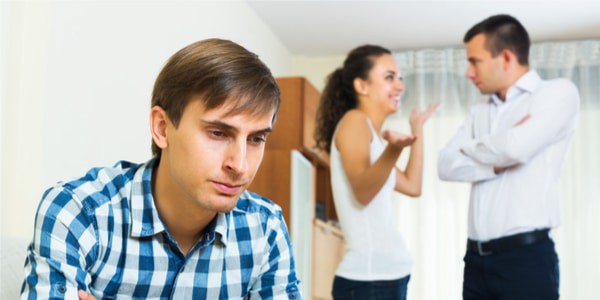 If your girlfriend makes you jealous and you don’t know how to deal with this situation the right way, then this article will show you the best way to handle your jealousy so you still look attractive in your girlfriend’s eyes.

If you think your girlfriend or wife is interested in someone else, or another man has shown interest in your woman, it’s natural to feel jealous. In psychology, this is known as mate guarding, which describes the defensive response that’s triggered when facing sexual competition.

If Your Girlfriend Makes You Jealous… 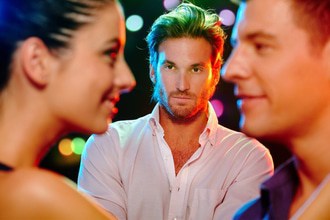 If you believe your girlfriend or wife has cheated on you or is about to cheat on you, those initial feelings of hurt, jealousy, and anger can be overwhelming. The natural response is to destroy the man that’s sexually defiled your partner. Submitting to your emotions, however, will do nothing to fix the problem or make those feelings of jealousy go away.

You must remember that jealousy is a temporary emotion. But because it’s such a primal emotion, it’s impossible to eliminate jealousy altogether. Eliminating jealousy, however, is an exercise in futility. Instead, it’s better to know how to handle jealousy the right way so you don’t kill attraction and turn a woman off. 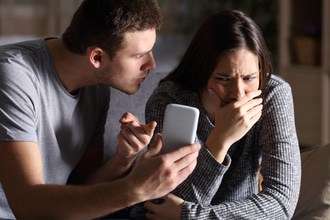 Glen was celebrating Christmas with his girlfriend Hope at her family home in the Berkshires when he noticed that Hope was spending a lot of time messaging people on her phone. Who’s she talking to? And dammit, how could she do this to me? I need to find out what’s going on, Glen thought.

Later that evening, when Hope was in the shower, Glen crept into Hope’s bedroom and checked her phone. On the screen, he saw a message from a guy called Kevin. Who the f#@k is Kevin?

The following day, Glen was watching TV when he saw Hope message someone on her phone and smile. How could she be so disrespectful? Glen thought as he gripped the edge of the sofa. “Look, we need to talk,” Glen said. “You can’t be texting other guys when I’m here with you.”

“What do you mean?” Hope said.

“You’re supposed to be on holiday with me.”

“I’m just talking to my friend.”

“Bullshit you’re talking to your friend.”

“What are you talking about?” Hope said.

“You know what I’m talking about.”

“Jeez, it’s nothing. I’m not going to turn my phone off just because I’m with you,” Hope snapped.

That night, Glen couldn’t sleep. He tossed and turned and all he could think about was Hope texting Kevin and all the other men who obviously wanted to have sex with her. What’s she texting them anyway? Are they having text sex? Are they sending dick pics? Is she actually having sex with them?

“Are you okay?” Hope reached out and touched Glen on the shoulder.

“I’m fine,” Glen said as he lay awake, staring at the ceiling. “Actually, I’m not. I don’t think you should be texting other guys when you’re with me.”

“Who are you talking to anyway?”

“Believe what you want,” Hope said.

“Show me your phone.”

“Good night,” Hope said as she turned away from Glen, pulling the duvet cover away from him. Glen was half-right about one thing—Hope was talking to other men, but she had friend zoned them all a long time ago. In her mind, Hope was telling the truth when she told Glen it was nothing to worry about. At least it wasn’t anything to worry about until Glen had decided to make a big deal out of it.

Two years later, Hope was sitting in a new apartment watching TV with Jack (her new boyfriend) when Hope pulled out her phone.

“A guy approached me today and asked for my number,” Hope said.

“Take it as a compliment. It means you’re still hot.”

Hope was caught by surprise. Glen had spent half his time worrying about other guys and the rest of his time trying to check her phone. Why wasn’t Jack acting the same way or getting upset?

“He was kind of cute too,” Hope said.

“It doesn’t bother you that a guy asked for my number?”

“Why would it bother me?” Jack said. “You’re a woman, guys are gonna hit on you.”

Hope didn’t know what to say. Not only was Jack not jealous, but somehow he had managed to make her feel as though “being hit on” was an everyday occurrence that happened to all woman. Jack was the complete opposite of Glen. He didn’t care if other guys talked to her, and he didn’t show any sign of jealousy or insecurity. Hope put her phone down and snuggled up close to Jack, resting her head on his shoulder.

Hope didn’t know why, but it felt so good to be close to this man.

Women use Jealousy to Attack Men 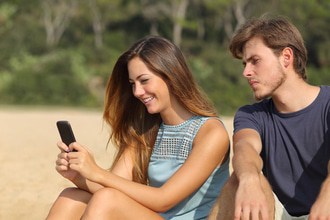 It’s not uncommon for women to use men as proxy weapons against each other as a way of finding out if a man is confident or insecure. Your job, as always, is to project strength and confidence, even in the most challenging circumstances. It’s tempting to explode with rage, to call a woman out, to become passive aggressive, and use every trick in the book to punish her for making you feel jealous. All of these reactions do nothing but reveal insecurity and emotional weakness.

If your girlfriend makes you jealous, try to find humor in the situation. Humor tells women you’re unafraid and unaffected by feelings of jealousy, even if your girlfriend makes you jealous on purpose. And where the unattractive man lets feelings of jealousy consume him and destroy the relationship, the attractive man acts in a way that is counter-intuitive and surprising.